Black Hole / Under the Skin

“You might also be stopped in your tracks by phrase-making I doubt could have been produced by anyone else on earth.” A belated thank you to Greil Marcus for this, about A Cultural Dictionary of Punk, which originally appeared (the Marcus thing, that is) in the October 2009 issue of The Believer.

All Roads Lead to the Present

A few years ago I wrote a doomed but sort of fun column over at The Oxford American called “Panel Busting.” One installment looked at a few nineteenth-century cartoons and their relationship to the development of early cinema and since then I’ve been picking up copies when I come across them of such illustrations/cartoons/comics. The one below is from a July 1870 copy Every Saturday, a short-lived periodical. I’ve scanned the full page (14” x 10.5″) as well as higher-resolution segment.

Depicting the time leading up to and the time immediately after Fourth of July antics what’s interesting is the non-linear portrayal of these frozen moments.  The highlight of the evening is centered on the page, surrounded by moments from the day beginning with “The Day Begins” (upper left panel) and ending with “Played Out” (lower center panel). But the moments in between seem undirected–the reader doesn’t seem to be visually directed to look at/read the panels in any particular order. Reading from clockwise from upper left doesn’t make any sense, and neither does reading (as we would today in “comic strips”) sequentially from left to right starting at the top left panel and ending at the bottom right panel, as if reading prose.

What is the relationship between cartoons and early cinema during this era? In what ways did cartoons become increasingly sequential as a result of the inescapable linearity of cinema? For no matter how “out of sequence” a film’s depiction of narrative is–whether through flashbacks or parallel editing or dream sequences–it still unfolds on the screen and is perceived by the viewer as a sequence. Until the advent of home viewing technologies it really wasn’t possible for an audience to experience a film except as a sequence of images whose duration was the length of the film. This is radically different, say, than experience the Fourth of July illustration, which a viewer could choose to read in any sequence she wanted, and which could last for seconds, minutes, or hours, or as long as wanted it to last.

Will Eisner touches on this a little bit in his great book Comics and Sequential Art, and there’s a good discussion of the relationship between simultaneity and early film editing, such as parallel editing or cross-cutting, in Stephen Kern’s book The Culture of Time and Space: 1880-1918, as well as in Charles Musser’s The Emergence of Cinema: The American Screen to 1907, where he writes about those years before the emergence of parallel editing: “One of pre-1907 cinema’s most distinctive features was its nonlinear temporality in the arrangement of scenes.” (And behind all this lies Deleuze, laughing.) I don’t think there’s a grand unifying theory here, but rather a vast and untapped collection of moments in time, lost illustrations/cartoons/comics that speak in cryptic ways about our efforts to forget, as Chris Ware says, that “all roads lead to the present.” 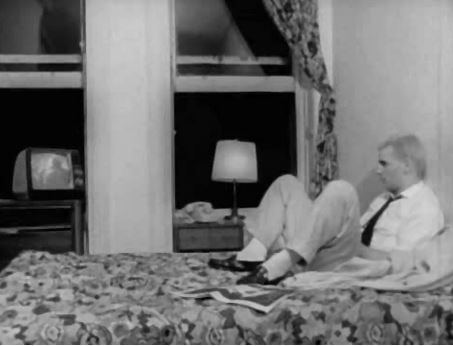 Reading Roberto Bolaño’s 2666 again (and yet again, eternally it seems, which is a sort of beautiful curse, or a curse that has no end) and there is a terror, a real terror, to certain lines, and not because of any pyrotechnic language but rather because of the direct plainness of it, as in the very early section where Morini (wheelchair-bound Morini, or perhaps faking to be wheelchair-bound, a heretical reading of the text, I know) has a nightmare about Liz Norton (“when she suffered, her pain was clearly visible”) which makes her a person to fall in love with, a person to love without honor or at least without the codes that govern love without honor, a nightmare that involves a pool (a pool governed by shadows) and Liz and Morini searching for Liz in the fog and afraid that he may topple into the pool and the line “Morini was about to shout again and wave when he sensed someone at his back. Two things were instantly certain: the thing was evil and it wanted Morini to turn around and see its face” (47). These lines, somehow, correct the world, or a perception of the world, which is to say that the evil here is not of psychology (True Detective recently pushed against this model, until its final episodes, but so much of our narrative today resolves itself around the psychology of the protagonists, as if neuro-science has become the new meta-narrative, or as if psychology were not really the individual expression of a sickness, an aberration, a cosmic aberration that includes [a thought only thought in the darkest of night: humanity itself]) but rather of something at once more cosmic and more banal, as if time itself had leaked back into the world, and in leaking brought with it the rust of pipes.) Of all the recent books (Julia Kristeva’s Powers of Horror and Mezzo and Pirus’s King of the Flies being the exceptions) 2666 comes closest glimpsing evil in both its capital E and lowercase e versions.

Back in 2010 I launched the Requiem 102 project, inviting theorists, writers, and artists in an exploration of Darren Aronofsky’s film Requiem for a Dream (2000). Here it is, and here is the introduction to the project. Each of the contributors’ posts was compelling in its own way, but one of my favorites remains Catherine Grant’s short video theorizing the film’s famous split screens. Grant’s work is powerful and creative, challenging us to use the tools of cinema itself in our study of cinema.

Establishing Split: On REQUIEM FOR A DREAM from Catherine Grant on Vimeo.

10/40/70: Constraint as Liberation in the Era of Digital Film Theory is now available in paperback and e-book from Zer0 Books. If you’d like a review copy, drop me an e-mail. Related to that, look for the astonishing results of “the 70s” project at Berfrois in mid-April. And for the annual Film issue at The Believer I’ve got a review of the trailer for Neighboring Sounds (image above).

Here are the films/contributors to The 70s so far. The list includes film title, director, and first name of the submitter. Excuse all caps; my typewriter is stuck on them. Further updates to follow.

Four frames from the extended walking sequence from the magnificent Agnes Varda film Cleo from 5 to 7 (1962). 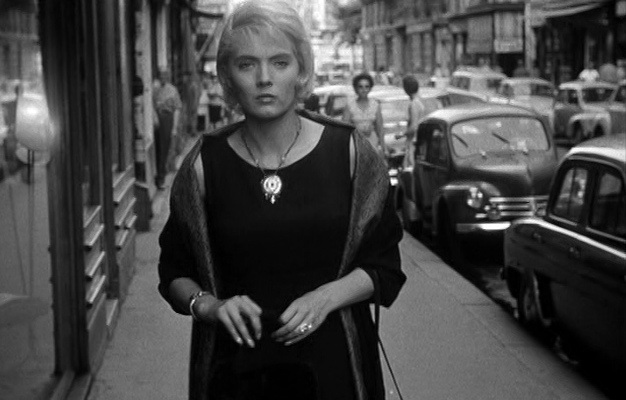 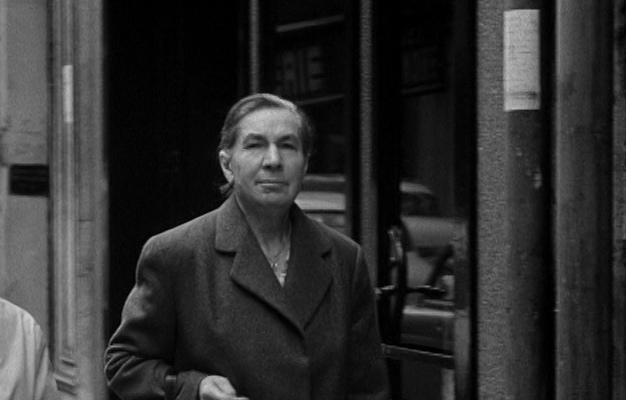 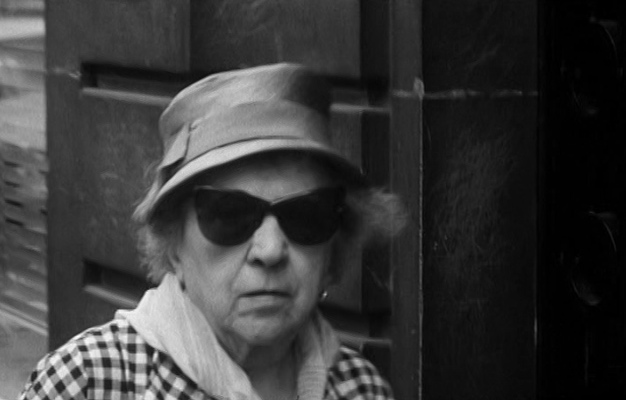 One of the reasons I buy used versions of books when I can, even when new versions are available for a better price, is the element of surprise in terms of the previous owners’ comments, markings, and doodles. This semester, in preparation for teaching Joyce Carol Oates’s 1966 story “Where Are You Going, Where Have You Been?” I ordered from an indie bookstore a copy of an edition (Rutgers University Press, 1994) of the story and critical essays edited by Elaine Showalter. Although it’s marked-up throughout in red pen, one section caught my attention: an essay by Gretchen Schulz and R. J. R. Rockwood which originally appeared, in 1980, in Literature and Pychology. It’s an interesting essay that uses Freudian literary analysis (in the way that Freudian literary analysis was often used in the 70s and 80s, a bit heavy on Oedipus) but the anonymous earlier owner of the book obviously took exception, in delightfully “mad” ways, to the essay. I’ve scanned some images and include them, below.

1. This was someone working on a dissertation, I think, because a few of this essays are marked “dis” or “dis.”–as if the person was thinking about using “x” essay in his/her dissertation.

2. Speaking of his/her: I think the person who marked up the book was XX not XY, based solely on my completely unforensic hunch about the nature of the handwriting. Am I alone, or when you look at handwriting–actual handwriting–do you associate it with a gender? And if so, on what basis?

3. What really haunts about marked-up books is the weird, blurred sense of audience. These notes seem to be private, for the person who made them, glosses for a later reading. And yet, isn’t there also an implied “other” audience? As if the person (whomever you are!) thought, even in the furthest back corners of her mind, that someday someone else (you, or me) would come across this book, and read the markings, and wonder. The beautiful, and sort of sad, thing is: I can never communicate back with the person who left these red notes.

4. I kept thinking of Judith Fetterly’s notion of “the resisting reader” during this.

5. Which is to say, if I could: I love you for your red comments, whoever you are, wherever you are. (And a while ago, at The Oxford American, something similar, from long, long ago . . .) 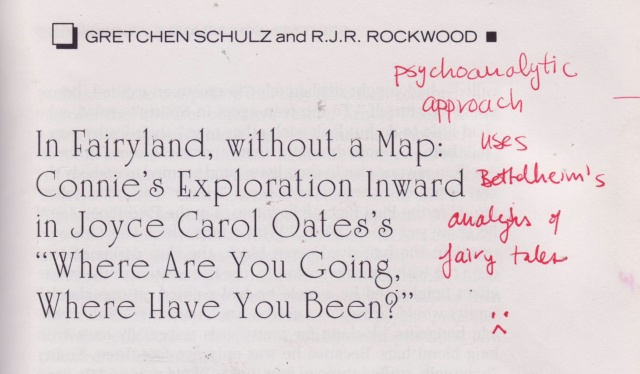 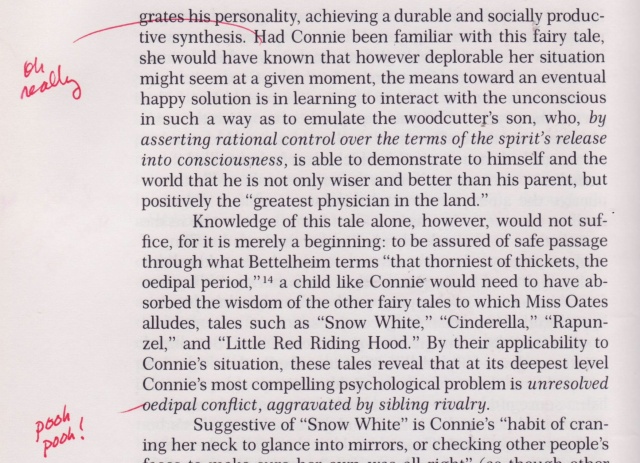